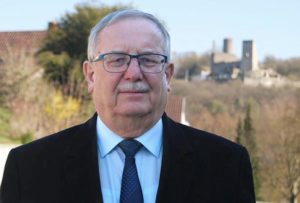 2 years time soldier in the Bundeswehr

8 years as an employee / authorized signatory

During the time as 1st chairman of the gymnastics club in Volkmarsen in 1890, extensive expansion and modernization of the club’s own gymnasium, from 1970

1990: Awarded the honorary letter of the German Gymnastics Federation

12 years of voluntary work in local politics, etc. Chairman of the Sports and Culture Committee of the City of Volkmarsen, member of the city council

i.a. successful use to build a social station

Since the beginning of the 1990s, intensive research and documentation of the history of German-Jewish families in North Hesse / East Westphalia, focus: “Oral history”, records of numerous memoirs of Holocaust survivors (including many interviews with contemporary witnesses of the “Kindertransport”)

Participation in numerous block seminars and lectures on the subject of the Nazi era: etc.

Organization of numerous contemporary witness visits to schools and other institutions

from 2000 to 2018: Speaker of the regional working group North Hesse-South Lower Saxony of the Association Against Forgetting – For Democracy e.V., Berlin,

since 2000: active participation in the working group “Christian Jews” in the Evang. Regional church of Kurhessen and Waldeck

Co-founder and board member of the Academy for Intercultural Education e.V., Volkmarsen

from 2013 to 2018: Spokesman for the 38 regional working groups on the executive board of Gegen Vergessen- Für Demokratie e.V., Berlin

Member of the federal board of “Against Forgetting-For Democracy e.V.”, Berlin

Member of the Commission for the History of the Jews in Hesse.

from 1998 to 2019: Head of the Documentation and Information Center on German-Jewish Regional History in the Villa Dr. Bock, Volkmarsen, from 2018 in Gustav-Hüneberg-Haus, Steinweg 24, Volkmarsen

– the creation of the memorial avenue Sobibor / Poland –

– the creation of the documentary “The Flight of the Children”

– the organization of over 500 public lecture and film evenings, author readings, etc.

– the creation of the traveling exhibition “Only the stars were like yesterday” about the life of Henryk Mandelbaum, prisoner in the Auschwitz special detachment

– the implementation of traveling exhibitions

– the exhibition “Legalized Robbery” – The pillage of the Jews by the tax authorities, in Kassel and Korbach

Region over the centuries “(www.rueckblende-volkmarsen-de)

Lectures of numerous self-developed presentations at the adult education centers in the Kassel and Waldeck-Frankenberg region, in schools, at museum and history associations, memorials, etc.,

“What happened to the property of the Jewish residents?” – Case studies from a small town in North Hesse

“Where did they go?” – the violent deportation of the Jews from Northern Hesse

2013: Rediscovery and excavation of a more than 500 year old Jewish ritual bath (mikveh) in the city of Volkmarsen

Special activities in the field of monument preservation:

Use to preserve the district court building in Volkmarsen (unsuccessful, from 1977)

Commitment to the preservation of the stone house in Pfortenstrasse

Collaboration with Prof. Steinebach with Mr. Frits Coghe on the documentation about the

Rediscovery, exposure in cooperation with the State Office for the Preservation of Monuments
and the Institute for Building Research in Marburg, discovery of Hebrew characters and symbols in the vaulted cellar

Complete exposure of the vaulted cellar with the ritual bath, restoration of the original condition of the three floors of the house at Steinweg 24